A Behavior is a Belief in Action: why change is so elusive 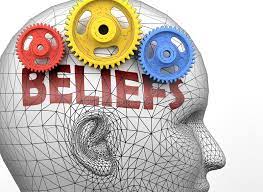 Have you ever tried to change one of your behaviors and failed? Well, not failed, exactly. Maybe you were successful for a week or three, but then reverted back to the old behavior. Do you know why you reverted back? It’s your brain’s fault: behaviors don’t happen merely because you desire them.

There’s a universal myth that behaviors are… well, they just are, somehow removed from any source or trigger that would instigate them. We assume because we ‘want to do’ something, it will happen. But behaviors don’t just ‘show up’; they are a response to an electro-chemical process in our brains. Certainly out of our direct control.

In this article I’ll attempt to instigate your curiosity and offer my theory. I understand I’m going against mainstream thinking, that the perceived wisdom says behaviors stand alone and can be changed through determination and discipline (i.e. Behavior Modification). But read what I have to say. I might just provide some new thinking.

Behaviors are part of a neurological process, the outputs of a series of brain connections that get triggered to act, brain connections formed through time from what we learn, how we live, what our parents and neighbors and jobs taught us. I call these our Mental Models.

In other words, behaviors are the visible display of who we are – so as a pacifist, you would expect me to not buy a gun. As a vegetarian, you would be surprised if I ate a steak. My behaviors express who I am at that moment in time (even when seemingly incongruent).

I believe, therefore I behave.

Take a look at the scientific graphic for how brains end up triggering specific behaviors, a simple equation that takes an incoming thought (an instruction, an input), through to action, a behavior (an output).

Inputs trigger outputs. See what it looks like once I add in where Beliefs and Mental Models sit so you can see how they instigate the behaviors:

As you see from this equation (There are also electro-chemical processes involved, including dopamine.), once a message enters as an input, it gets filtered by specific Beliefs that then select signals that ‘match’ the input signals and go through brain sequences that end up as an output/action. There is no way for a behavior to occur without the signals that instigate them and without circuits that translate the incoming vibrations into meaning.

And yet when people attempt to make a change they address only the outputs and fail to start from the source – the stimuli, the initiators, the triggers – that triggered them. It should be obvious that with a different input, a different output will result. So

will conclude with someone’s brain seeking out the historic superhighway for ‘diet’ and produce the same results as previously. But if the input instructions are changed to

“I am a healthy person who will research best nutritional choices for my body and eat what will produce my best weight that I can maintain over time.”

The results will be different, a new ‘superhighway’ will be created, and it will be far simpler to reach, and maintain, optimal weight.

I contend a behavior is a Belief in action, the output that results from the brain processing an input. I believe that who we are and what Beliefs, values norms, and history define us, determines our behaviors.

Everything we do, everything we say, is a visible sign, an indication, of who we are. And I strongly believe that without new input, it’s not possible to change the output/behaviors.

If you wish more in-depth knowledge, watch my video explaining the elements of brain change: http://buyingfacilitation.com/blog/courses/the-how-of-change-sample/?lesson=62

BEHAVIORS ARE BELIEFS IN ACTION

Think of something you did recently, something simple, like go grocery shopping. The driver is your belief that it’s necessary to buy food to stay alive, that you’re running out of bananas. Simple.

But what about the type of words you use in conversation? Or who you vote for? Everything we do and say is a result of a Belief in action.

Recently a student of mine from Pakistan had a problem with her boss. She wanted to tell him that he was rude and disrespectful and he was trying to demoralize her. What’s your underlying Belief, I asked. “He’s a mean person who hates women and it’s time someone told him he’d better clean up his act.”

I asked her what she would say if her Belief was “No one willfully harms another and he may not realize I feel disrespected from his interactions, that because he’s from Pakistan his verbal habits might be cultural.” Oh! With that Belief change, she eventually called him and said:

“I’d like you to know how disrespected I feel during some of our conversations and it cuts off my creativity. I know you don’t speak to me this way intentionally, but I want us to work together in a constructive way so that together we can make a difference in the world. Is there a way we can communicate in a way that makes me feel more respected?”

He instantly became apologetic, said he hadn’t realized he was speaking disrespectfully, and he hoped she could forgive him, that he valued her, that he would work at speaking with more respect. From then on, their relationship and her creativity flourished. He even made her a close colleague, asking her opinion on several things he was working on and brought her in to meetings as a ‘leader’.

If she had acted on her originating Belief, she would have ended up being fired for being disrespectful. Instead he now sees her as management material. Change the Belief, change the behavior.

I have a story of a Belief change of mine and how it helped a neighbor.

My neighbor Maria came over one day crying. Seems she had been diagnosed with Pre-Diabetes and given a standard diet to lose 30 pounds. She was frightened that she’d end up dying from diabetes like her Mom did. I took her to Whole Foods and we purchased healthy versions of what she ate at home. She ended up losing 10 pounds by the time I left to train clients in India. When I returned 3 weeks later, she came over crying again. She had put the weight back on and remained scared that she’d never lose it and end up dying.

That’s when I realized that I had chosen to ‘do’ something (behavior) to help her, wrongly believing (Beliefs) that I could get her on the right path; that eating the ‘right’ foods (i.e. a behavior change) was the answer. But I hadn’t helped her create new circuitry so she could figure out her own change. I shifted my Belief to: Maria must be responsible for her own choices (behaviors) and I can help her create new Belief-based inputs.

I used my Buying Facilitation® process (a generic belief -> behavior decision facilitation model I’ve trained in sales for decades) on her:

SD: What has stopped you from being comfortable following your doctor’s diet?

M: If I did, I wouldn’t have the love I get from my family.

Wait, what? How did her family get included in this? I thought it was about food! [Note: Beliefs are often unconscious and outsiders rarely know what instigates them.]

SD: So I hear you saying that food, family, and love are tied together for you.

M: Right. Every morning I make 150 tortillas and put them in bags for my kids and grandchildren. Every morning they all come by, and I stand out on the curb handing out bags for each of them. Then Joe and I eat the rest. Tortillas are not on my diet.

SD: And you’d miss seeing your family every day if you didn’t hand out the tortillas!

So her Beliefs were based on something entirely different from anything food-related, and these are what prompted her behaviors. Unconscious. Automatic.

Maria and I put together a plan of action that would incorporate her Beliefs with her doctor’s orders. She had a large dinner party during which she handed her daughter Sonia her beloved tortilla pan wrapped up in a big red bow.

M: I am having health issues and can’t eat or make tortillas anymore. From now on Sonia will be the new Tortilla Tia (auntie) and will make them and hand them out every morning. On Fridays, I’ll make you enchiladas and you can come by here!

By discovering her unconscious Beliefs Maria was able to change her behaviors to lose her 30 pounds – and keep it off because she changed her eating habits permanently.

Obviously, outsiders cannot know someone’s unconscious Beliefs – even they don’t always know them! Yet in order to make congruent changes they must. As coaches, parents, managers, and for yourself, it’s necessary to get to the Beliefs to add or change a behavior. Here are some questions to ask yourself:

I’ve been developing belief-based behavior change models for decades, starting with my Buying Facilitation® model that leads Others through their unconscious Beliefs and systems so they can quickly make good decisions (used in sales, leadership, coaching), through to my How of Change model that actually teaches how to create new neural circuitry.

With so much of neuroscience focusing on ‘behavior change’ and omitting the need to begin with Belief change, we are withholding real support. Doctors could be facilitating ill people through to real behavior change and health; coaches could be helping people quickly discover their own answers with no bias from the coach; managers and parents and influencers could truly serve Others to find their own solutions.

I’m happy to share my knowledge with you. sharondrew@sharondrewmorgen.com. Or go to my site www.sharon-drew.com and read about some of my inventions. I look forward to us all learning exactly HOW to make a difference.