Change Without Resistance: Podcast series and article on generating buy-in with systems thinking 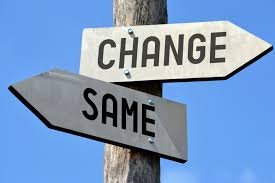 Why does it seem so hard to change a habit or a behavior? Why do we drag our feet when buying a replacement appliance or car? Why do our teams go through disruption when going through a merger? Why do we resist changing our diets or adding exercise to our day when we know it’s good for us?

The oft-repeated myth claims people hate change, that change is hard. But that’s not true. People like the results of change; they just fear the process, the disruption and disorientation that change seems to cause. But the problem isn’t the change; it’s the way we’re approaching it.

The very skills we use to instigate change cause the resistance, struggle, failure to change, and conflict that occur when we initiate doing anything outside of our habituated norm. With a different skill set we can not only avoid resistance altogether, but change in a way that’s pain free, creative and expansive. In fact, change can be a pleasure.

In this article I’ll briefly discuss the topics necessary to consider painless change, and link to five 30-minute podcasts I taped a while ago with Nathan Ives of Strategy Driven Magazine. Since I recorded these podcasts, I’ve since developed a How of Change program that actually teaches how to isolate the exact elements in the brain to consciously generate new neural pathways to stimulate easy change. As always, I’m here to discuss.

Change means doing/thinking something different than our status quo – our internal system that has been accepted, habituated, standardized, and normalized through time – potentially replacing it with something unknown, untried, and therefore risky.

And therein lie the problem: because our change methods don’t take systems into account, anything we do to effect change potentially causes a destabilizing effect and puts our system at risk. This fact alone causes disruption, pain and confusion. We’re trying to push an as-yet unaccepted element into a fully/long-functioning stable system that hasn’t agreed to alter itself, and it’s defending itself.

To do anything different, we need approval and a route forward from our unconscious system; to change congruently, we must consciously facilitate our normalized, unconscious internal structure to design new and acceptable rules for any additions.

Once the ‘new’ is acceptable, seen to be nonthreatening, recognized as having the same rules, norms, values as the status quo, it will be easily adopted. Note: regardless of the efficacy of the new, or the problems inherent in the status quo, change is not acceptable until the status quo, the system, the group of norms and beliefs that have been good-enough, recognizes a way to normalize itself with the new included.

#1 What is Change? and Why is Change so Hard?

WE IGNORE THE SYSTEM: HOW BIAS AND INFORMATION PUSH CAUSE RESISTANCE

Historically, we have approached change through information sharing, traditional problem-solving methods, personal discipline and behavior modification, and strong leadership, assuming by pushing new information – new activities, new ideas, new rationale, requests for different behaviors – into the status quo it will be sufficient. But it’s not. We’re ignoring the system, causing it to resist to maintain itself.

Why are systems so important? Systems are our glue. Our lives are run by systems – families, teams, companies, relationships. Each of us individually is a system. Systems are made up of rules and norms that everything/everyone buys in to and that maintain the beliefs and values, history and experience, that make each system unique and against which everything is judged against.

And each system holds tightly to its uniqueness as the organizing force behind the activities, goals, and output of our behaviors. Change any of the elements and we change the system; try to push something new into the system, and it will defend itself. We learned in 6th grade that systems seek homeostasis (balance), making it unlikely we can pull one thing out of a system and shove something else back in without the system resisting.

Currently, our attempts at change (sellers, coaches, negotiators, or diets, exercise programs, etc.) are little more than pushing a new agenda in from the outside and assuming compliance will follow because the new is ‘better’ or ‘rational’. But because the new most likely doesn’t match the unique, internal norms already in residence, we get implementation problems in teams, closing delays in sales, resistance to changing eating and exercise habits, modification problems in healthcare and coaching. Indeed, all implementations, all buying decisions, all negotiations, all new behavior generation, are change management problems.

It’s possible to introduce change in a way that does not cause resistance – from the inside out, by teaching the system how to reorganize along different lines, in accordance with its own rules and values.

For lasting change, it’s necessary to enlist buy-in from the system. Any reasoning or validation for needed change will be resisted because the system fears disruption. Hear how systems are the organizing principle around change – and what to do about it.

#2 What are Systems and How Do They Influence Change

The universally held concept is that resistance is ubiquitous, that any change, any new idea, will engender resistance. University programs teach it how to manage resistance; Harvard professors such as Chris Argyris and Howard Gardner have made their reputations and written books on it; consultants make their livings managing it. Yet there is absolutely no reason for resistance: we actually create the resistance we get, by the very models we use to implement change.

The underlying problem is, again, systems. As per homeostasis, a system will fight to continue functioning as it has always functioned, regardless of how impractical or non-efficient it is or how compelling the new change might be. And by attempting change without an agreement from the system, without designing any implementation of the new around the inherent beliefs, values, and norms of the status quo, we’re causing imbalance.

Systems just are. They wake up every day maintaining the same elements, behaviors, beliefs, they had yesterday, and the day before. They don’t notice anything as a problem – the problems are built in and, well, part of the givens. When anything new attempts to enter a system and the system has not reorganized itself to maintain systems congruence, it is threatened (Indeed, we are threatening the status quo!) and will defend itself by resisting. Hence, we always define and create our own resistance.

It’s possible to avoid resistance by beginning a change process by first facilitating the system to re-think, re-organize, re-consider its rules, relationships, and expectations, and garner buy-in from all of the elements that will touch the final solution, while matching the introduction of the new accordingly. Believe it or not, it’s not difficult. But we do need a new skill set to accomplish this.

#3 If Decisions Are Always Rational, Why Are Changes Resisting?

WHY BUY-IN IS NECESSARY AND HOW TO ACHIEVE IT

As sellers, change agents, coaches, doctors, parents, and managers, we seek to motivate change. Whether it involves a purchase, a new idea, a different set of behaviors, or a team project, all successful change requires

[Note: I teach this change process as Buying Facilitation® to sellers to facilitate Pre-Sales buying decisions, and coaches as a tool to generate permanent change.] Until this is accomplished, resistance will result as the system attempts to defend itself.

#4 Why is Buy-in Necessary and How to Achieve It

HOW TO AVOID RESISTANCE, DISRUPTION, AND FAILURE

Until now, we have approached change by starting with a specific goal and implementation plan and seeking buy-in to move forward successfully. While we take meticulous steps to bring aboard the right people, have numerous meetings to discuss and manage any change or disruption possibilities, our efforts are basically top-down and outside-in and end up causing resistance and disruption.

Starting from the inside begins with an explicit goal that everyone agrees to, but leaving the specifics – the Hows – up to the people working with the new initiative, an inside-out, bottom-up/top-down collaboration. While the result may not end up exactly like imagined, it will certainly meet the objectives sought, and include far more creativity and buy-in, promote leadership, continue through time, and avoid resistance and disruption – and potential failure.

Change need not be difficult if we approach it as a systems problem. I’ve developed models for sales, leadership, coaching, and healthcare that facilitate systemic, congruent, values-based change. I’m happy to help you think this through or implement it. To learn more about systemic models for decision making, change, and sales, go to http://sharondrewmorgen.com/ or contact Sharon Drew at sharondrew@sharondrewmorgen.com

Here’s a link if you wish to have copies of the entire series Making Change Work.

Sharon Drew Morgen is an original thinker, thought leader, author, and the inventor of the Buying Facilitation® model, a decision facilitation and change management model often used in sales to help sellers facilitate the change issues buyers must address before they can make a buying decision. She’s written 7 books on the topic including NYTimes Business Bestseller Selling with Integrity, and Dirty Little Secrets: why buyers can’t buy and sellers can’t sell. Sharon Drew has trained many Fortune 500 hundred companies to help people become buyers, to help staff change and be motivated, to give leaders the tools to lead effectively without resistance.

Sharon Drew also tackles listening, and closing the gap between what’s said and what’s heard. Her book on how to hear others without bias, What? Did you really say what I think I heard?, is used by several organizations to enable them to hear each other, and clients, accurately.. See www.sharondrewmorgen.com for a range of articles on change, buying decisions, and hearing others. She can be reached at sharondrew@sharondrewmorgen.com