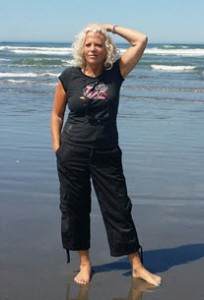 Starting with my confusion: I will never understand what it is about women that men are willing to get stupid over, become abusive for, lose integrity over; to be willing to harm or violate or ignore; to deny rights or pay or work opportunities (or remain silent when these things happen). I just don’t get it. Men treat pets with dignity. Take care of their cars. Respectfully attend to their jobs. Why are women in a separate category that makes us a potential object of harm when we’re merely people who want the same things men do?

Don’t get me wrong. A vast majority of men are kind, responsible, ethical, and integrous in their treatment of women. Until they get to work and unconsciously don’t hear a creative idea that comes from a woman (but welcomes that same idea from a man minutes later). Or fail to object when a colleague or business practice discounts women. Or inadvertently overlooks an applicant because her skill set ‘doesn’t seem right.’ Or rejects a funding proposal because the company is woman-run. I was once on a plane that had a 100% female crew; when it was announced, a male passenger grabbed his carry-on and got off the plane, not trusting that he’d get where he was going because women would be flying him there.

Like many women in business I’ve spoken with, I’ve had my share of misogyny – innovative ideas ignored, sexual favors required, positions lost, funding denied. (I was denied funding for a killer idea in 1996, at the height of the tech boom when 4% of funding went to women. Now it’s up to 20%.). My pioneering ideas have been discounted; I’ve even been left out of conferences at which my original, and published, ideas were featured. SiriusDecisions included my model Buying Facilitation® in their deck discussing the future of sales – sans ®, and sans attribution. “Come on, Sharon Drew. Let us use it like that. We’ll tell you if we get calls on it.”

Indeed, some terms I coined were attributed to men 30 years after I coined them. After one particularly innovative article I published I received an email from a man who said, “Well, you’re certainly full of yourself, aren’t you?” (I cheerfully responded, “Yup.”). I wonder if he would have sent that to a man. Or if the Chairman of the Board would have offered to stop a Board meeting when I teared up with rage: “Oh! Um, shall we take a break for Sharon Drew?” I’m not an object of pity, you nitwit. I’m just livid. That’s what women do. We have visible feelings. (How did ‘no visible feelings’ become the standard anyway?)

I’ve been overlooked for positions I was well-qualified for as some unqualified man got the job. I’ve had prospective clients who actually said they wouldn’t choose me because I was a woman, even after a successful pilot. Years ago, following a pilot training for Morgan Stanley, the MD sent one of the brokers around the country to trial several sales training methods to see if they were anything like my Buying Facilitation® model. Why seek someone else when the results were so terrific, the broker asked? ‘She just doesn’t fit.’ Boston Scientific wouldn’t do further training when the pilot study brought a 53% increase in sales in ONE MONTH because I was too ‘controversial’.

I’ve had company-saving ideas ignored, project schedules countermanded. In 1985 I took out a full page ad in the London Financial Times that was blank except for the words The Quality is Free across the middle (company details in a small font on the bottom); an FT editor actually came to my office unannounced with content he’d written ‘for me’ to fill the page, saying he ‘wouldn’t let me make the mistake’ of wasting my money on an ad that size to only print a few words (Let’s see: was brand marketing wrong? or was it just that I was a silly woman?). I told him I wouldn’t discuss it but we should have a cuppa and talk football. The ad ran my way.

And don’t get me started on the sexual thing in the workplace. Clients showing up at my hotel room the night prior to a training program for a ‘nightcap.’ Or being harassed and taunted and pranked on the floor when I was the only woman stockbroker. One well-known speaker told me he’d get me some big gigs if he could touch my breasts. Imagine telling a man who’d written a New York Times Business Bestseller that he could get a speaking gig if the recruiter could touch his genitals. Not only do these things happen, but somehow we live in a world where it’s even thinkable.

WHY DO GENITALS MATTER?

How is it even possible that a particular set of genitalia ensures a human being will enjoy cleaning house or changing dirty diapers? I once witnessed the CEO of a large company hand his infant daughter back to his wife to change: “I don’t do that” he said, smiling as if it were obvious. Nobody LIKES doing it, you knucklehead! As a grown up you do what needs to be done! How is it that some men live in a world in which they only ‘need’ to do what’s convenient or fun?

And why is it a viable option to walk out on children without offering support? How many children grow up with no responsible male figure loving them? I knew a man who left his newborn son and partner because he ‘told her I never wanted a child.’ And yet, there he was, a son he never once held or supported in any way – the assumption being that the woman would do it (or the child would die?), and that the child would never mind that he was abandoned at birth and never know his father. And why don’t men ever know their kids’ shoe size? Betty Freidan once told me that until men did half of the childcare and housework, women would never be equal. Current statistics I’ve seen say men, on average, do one third of household and childcare tasks, even in two earner families (and that men actually cause 7 hours of additional housework).

What’s the deal? Women are strong, intelligent, fierce, creative, kind, loving, sexy, empathic, collaborative and responsible. We give birth (Men should try that sometime just for a bit of reality testing.), are the glue that holds together families and traditions and companies and lives. In business we think outside the box, are organized and compassionate, and fix relationships on teams, yet are historically underpaid in every industry, as well as under-represented as mayors, or CEOs, or leaders. Male colleagues have told me countless times they prefer hiring women because they cost less and over-perform. Companies suffer when women’s ideas aren’t heard or integrated into the mix; it’s a well-known fact that women managers are better leaders bringing heart and a unique view of the world that men can’t fathom. Seems men would rather suffer financial and creative loss than allow women to participate.

I’ll never, ever understand why any of this is ok, why silence prevails and why there isn’t a higher level of public outrage when one class of people denigrates and harms another. Although it shows up differently in each culture, each industry, each country, and each household, the need for ‘power’ and ‘control’ are said to be the cause. Seriously? Men don’t know the difference between real power and force? Men can only be powerful by putting down, harming, restricting, ignoring, or humiliating another human because her genitals are different? We’re human beings for goodness sakes – the other gender that populates the world, remember? Your wives and mothers and daughters and friends; your partners in life and work; inventors and poets and CEOs and factory workers – people with brains and hearts and passions and hopes for the future, just like men.

But my underlying wonderment is How. How can it be right to denigrate another human being? How is it possible that more than one half of our population is ‘less-than’ because we were born with a one set of genitals instead of another? How is it possible that this isn’t a political cause, like opioid addiction, or football injuries? That being female is an automatic filter that allows treatment in a one-down position?

Stop it, guys. Put on your big-boy pants and grow up. Seek, accept, respect, communicate, hear, and partner with the women in your life. You’ll be better for it. So will the world.

Sharon Drew Morgen is an original thinker and thought leader, the author of 1700 articles and 9 books including NYTimes Business Bestseller Selling with Integrity and two Amazon bestsellers: Dirty Little Secrets – why buyers can’t buy and sellers can’t sell, and the game changing What? did you really say what I think I heard? the explains, and fixes, the gap between what’s said and what’s heard. Sharon Drew is the inventor of a Change Facilitation model that gives influencers a unique set of tools to facilitate congruent change for buyers in sales (Buying Facilitation®), leadership, coaching, and management. She is an inventor, speaker, trainer, consultant, and coach. Sharon Drew currently lives on a floating home in Portland, OR. Her award-winning blog www.sharondrewmorgen.com carries articles on communication, leadership, decision making, change, sales, and buying. She can be reached at sharondrew@sharondrewmorgen.com.