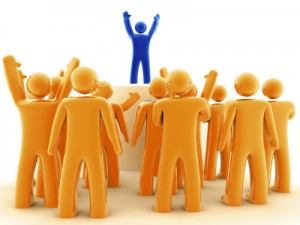 I’m a dancer. When I studied the Argentine Tango there was a foundational rule that I believe is true for all leaders: The leader opens the door for the follower to pass through, and the leader then follows. If anyone notices the leader, he’s not doing his job. The goal is to showcase the follower.

Much of what is written about leadership falls into the category I call ‘trait-centered leadership’: someone deemed ‘at the top’ who uses his/her personality, influence, and charisma to inspire and give followers – possibly not ready for change – a convincing reason to follow an agenda set by the leader or the leader’s boss. Sounds to me like a mixture of Jack Welch, Moses, and Justin Bieber.

What if the leader’s goal overrides the mental models, beliefs or historic experiences of the followers, or the change is pushed against the follower’s values, and resistance ensues? What if the leader uses his/her personality as the reason a follower should change? Or has a great message and incongruent skills? Or charisma and no integrity? Adolf Hitler, after all, was the most charismatic leader in modern history.

Whether it’s for a group that needs to perform a new task, or someone seeking heightened outcomes, the role of leadership is to

1. facilitate congruent change and choice,
2. in accordance with the values, skills, and ability of the follower,
3. enabling them to shift their own unique (unconscious) patterns,
4. to discover and attain new behaviors congruently and without resistance,
5. within the parameters of the required change.

It demands humility and authenticity. It’s other-centered and devoid of ego, similar to a simple flashlight that merely lights the existent path, enabling followers to discover their own excellence within the context of the change sought. It’s an inside job.

Being inspirational, or a good influencer with presence and empathy, merely enlists those whose beliefs and unconscious mental models are already predisposed to the change, and omits, or gets resistance from, those who should be part of the change but whose mental models don’t align.

This form of leadership has pluses and minuses.

* Minuses: the final outcome may look different than originally envisaged because the followers set the route according to their values and mental models.
* Pluses: everyone will be enthusiastically, creatively involved in designing what will show up as their own mission, with a far superior proficiency. It will more than meet the vision of the leaders (although it might look different), and the followers will own it with no resistance.

Here are some differences in beliefs between trait-centered leadership and more facilitative leadership:

Trait-centered: Top down; behavior change and goal-driven; dependent on power, charisma, and persuasion skills of a leader and may not be congruent with foundational values of followers.

Facilitation-centered: Inclusive (everyone buys-in and agrees to goals, direction, change); core belief-change and excellence-driven; dependent on facilitating route between current state and excellence, leading to congruent systemic buy-in and adoption of new behaviors.

Real change happens at the belief level. Attempting to change behaviors without helping people change their beliefs first meets with resistance: the proposed change pushes against the status quo regardless of the efficacy of the change.

1. Listen for systems. This enables leaders to hear the elements that created and maintain the status quo and would need to transform from the inside before any lasting change occurs. Typical listening is biased and restricts possibility.
2. Facilitative Questions. Conventional questions are biased by the beliefs and needs of the Questioner, and restrict answers and possibility. Facilitative Questions enlist the unconscious systems and show them how to adopt change congruently.
3. Code the route to systemic change. When asking folks to buy-in, build consensus, and collaborate, they don’t know how to make the necessary changes without facing internal resistance, regardless of the efficacy of the requested changes. By helping people move from their conscious to their unconscious back to their conscious, and facilitating buy-in down the line, it’s very possible to avoid resistance.

If you seek to enable congruent change that captures the passion and creativity of followers, avoids resistance, and enables buy-in, open the door and follow your followers.

Sharon Drew Morgen has designed a servant leader-based Change Facilitation model, using the process in sales (Buying Facilitation®), coaching and leadership, and communication, all enabling others to congruently change themselves. She is the author of several books, including the NYTimes Business Bestseller Selling with Integrity and the Amazon bestsellers Dirty Little Secrets: why buyers can’t buy and sellers can’t sell  and What? Did you really say what I think I heard? Sharon Drew helps the health industry achieve buy-in between providers and patients; helps coaches and leaders enable lasting change with clients; helps sales folks facilitate the entire buying decision path from Pre-Sales to close. Her award winning blog has hundreds of articles that support change (www.sharondrewmorgen.com). She can be reached at sharondrew@sharondrewmorgen.com. 512 771 1117.